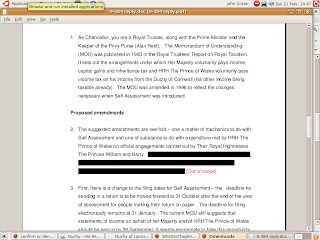 but the authority that responded to the request made a mistake, so when you highlight the paragraph you can read the text they didn’t want you to know about: 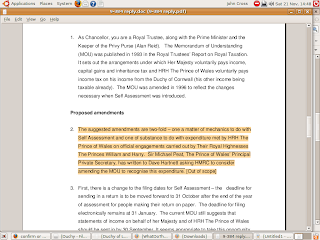 You can click on either of these pictures to see a larger image. You can also read the original document – to read the redacted text just highlight the relevant paragraphs with your mouse.

The hidden text exposes the fact that Prince Charles was secretly lobbying to get the rules changed so he could pay less tax.

The hidden text is in red below:

“The suggested amendments are two-fold – one a matter of mechanics to do with Self Assessment and one of substance to do with expenditure met by HRH The Prince of Wales on official engagements carried out by Their Royal Highnesses The Princes William and Harry. Sir Michael Peat, The Prince of Wales’ Principal Private Secretary, has written to Dave Hartnett asking HMRC to consider amending the MOU to recognise this expenditure.”

[MOU stands for ‘Memorandum of Understanding’ – which sets out the basis on which the Queen and Prince Charles pay tax.]

“But, as Sir Michael’s letter sets out, the Princes will increasingly incur expenditure when undertaking engagements on behalf of The Queen.”

“The question of official expenditure by The Princes is not a big issue now, given their other duties. But from next year, it is expected that HRH The Prince William will spend a significant part of his time on official engagements and we need to put the necessary provisions in place in anticipation of that.”